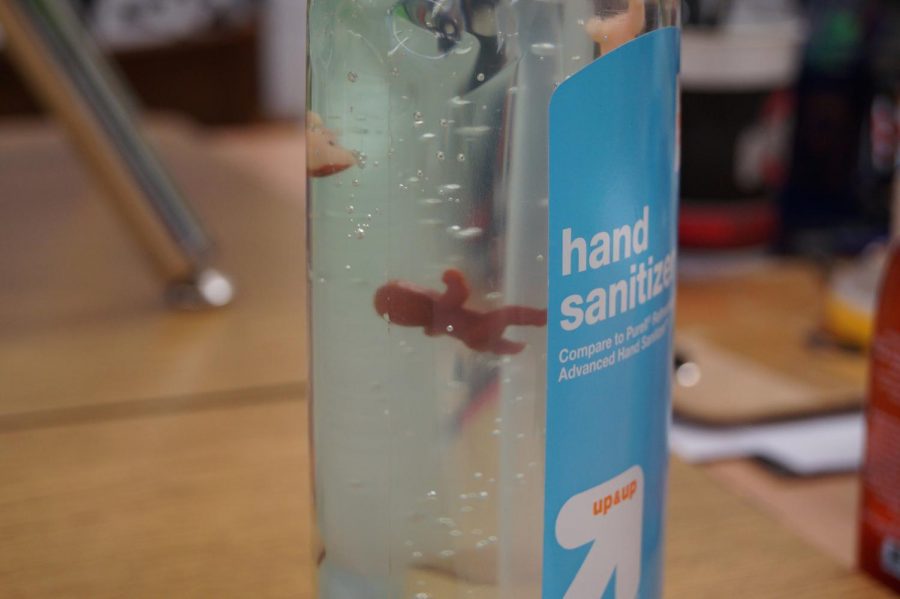 A plastic baby floats in a bottle of hand sanitizer. This is just one of several babies hidden in Lamb's room.

Sitting on pencil sharpeners, hanging off white boards, hiding in vents. These are all places that students have found tiny, plastic babies.

The small plastic baby figures started popping up around the school throughout the end of September and early October and the fad has the whole school mesmerized.

“I remember sitting in Mr. Lambs room and I looked up and there were three babies along the white board,” sophomore Elijah Shireman said.

Although most of the school is aware of the plastic babies, many have no idea who put them there in the first place. There has been speculation and rumors, but no one has claimed responsibility for the act.

“[Students] are all just asking ‘where are these babies coming from?’ and then they start looking online for where you buy these little babies,” English teacher Ariel Uppstrom said.

The babies around the school can currently be found on Amazon where they sell for around ten dollars. These packs usually come with around 100 babies and vary in color.

Whomever is responsible for dispersing this babies throughout the school may have been inspired by social media. Beginning in the spring of 2019, many teenage YouTubers have posted videos about buying the same figurines from Amazon and hiding them around their schools.

Most of the school agrees that, although strange, the hidden babies are a good prank.

“It doesn’t destroy anything, it’s funny, it’s quirky, it’s unique, it’s clever, I like it,” Uppstrom said. “I think it’s funny [and] it’s way better than letting crickets go in the hallways or something.”

The prank has gone so well that even teachers have been able to join in on the fun. Shireman recounted how every time someone would ask his Geometry teacher, Joshua Lamb about the babies in his classroom, he would put a tally mark on the board. This started a running gag of students asking both about the babies and the tally marks.

“It’s a little dumb I will say, but I mean it’s like you’re super concentrated on one of your classes and you see a baby and it’s a good chuckle,” Shireman said.

Some students have even made a mission of finding as many babies as possible. Freshman Reagan Connar was able to find five babies throughout the school, but currently only three remain.

“Some people have taken mine, so I used to have more,” Connar said.

Although Connar and others have had their share of fun with the hidden babies, they have started to disappear.

“I really haven’t heard much about it this week,” Uppstrom said. “It was like an explosion of discussion about it then it faded away.”

With the teachers noticing their absence, students agree that the joke is getting old.

“I do think the meme will die,” Shireman said. “The babies in Lamb’s room are gone and I haven’t seen babies anywhere else.”

Connar also pointed out how “they’re not that popular anymore.”

Even with the decline of the prank, it’s likely that the appearance of plastic babies will be looked back on and laughed at.