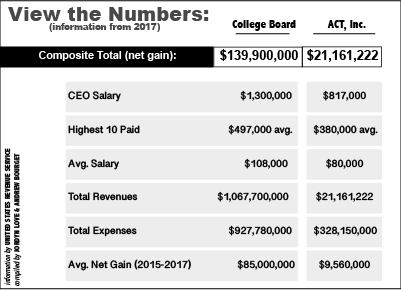 In the 2018-2019 year, use of college readiness services from the College Board, such as the PSAT, SAT and Advanced Placement (AP) courses, reached another high.

The number of AP exams taken during 2018-2019 was over 5 million, according to the College Board’s SAT Suite of Assessments Program Results. That’s over a 20 percent jump from the 2017-2018 year when 4.2 million were taken. In addition, about 6 million students took the PSAT and 2.2 million took the SAT.

This year, the standard fee for AP exams is $94 for most students. For some that need it and qualify, reductions from the College Board can bring down the cost to $62, and different states have allocated funds to even further reduce or eliminate the cost.

“The final fee for any AP Exam… for a qualifying student is $0…” the Ohio Department of Education said in a statement. “Paying these fees will meet the Ohio Strategic Plan for Education’s effort to address equity issues and should help narrow the achievement gap.”

A lesser known cost of AP exams is how much it costs school districts to administer the tests.  A portion of the AP exam fee, $9, is given back to schools as a rebate to cover the cost of administering AP exams.

For the 2018-2019 school year, 495 AP exams were taken at Hayes. The school pays two substitutes trained in how to proctor the exams for each exam class per day. That ends up being around $120 per day per substitute, according to Kier Smith, the counselor responsible for AP testing.

In addition to the fluctuation in the coverage of the cost of administering the exams by the rebate, some critics have also cited the high salaries of many College Board employees and executives while the cost of the AP exams for students has remained high.

Form 990’s are documents filed by non-profit organizations for the government disclosing their revenues and expenses for the year.

According to the College Board’s Form 990 from 2017, the CEO and President David Coleman made over $1.3 million. The average salary of the 15 highest paid executives was $440,000 compared to the average overall employee salary of $108,000.

The salary of Coleman is unlike the salaries of the heads of comparable non profits, like ACT, Inc., which administers the ACT.

These discrepancies may be due to the smaller number of services given by ACT, Inc. The College Board offers the SAT, PSAT and AP courses while ACT, Inc. only offers the ACT, which is more widely taken but services fewer students in total than the total of the College board.

Beyond high salaries, the overall net gain of the College Board should also be considered.

This money is the surplus of revenues after the expenses of operating and maintaining the College Board are paid for. The College Board has not responded to a request for comment on the subject. The information in their Form 990’s suggests that they accumulate this excess. Doing so is not abnormal.

“That extra money is what is used to sustain the business in any way it needs,” accountant Brandon Brown said. “You’ll never really see a non-profit breaking even on purpose; the goal is to make money so you can perform your specific purpose [as a non-profit].”

Their net gain is much larger than that of ACT, Inc., however.

This too might be a result of the difference in the amount of services given by the ACT.

Despite the financial criticisms of organizations like the College Board, their services for students – to challenge and prepare them for college – are prevalent.

“[AP] is college level, so it’s definitely preparing students for that next step…” Pollard said. “It’s as rigorous if not more rigorous than some of the college-level courses that you’d take.”

Students who have taken the courses agree.

“I took AP classes because they are the highest level classes available and offer an academic challenge,” senior Max Thomas said. “they have more content and allow learning at a higher level.”