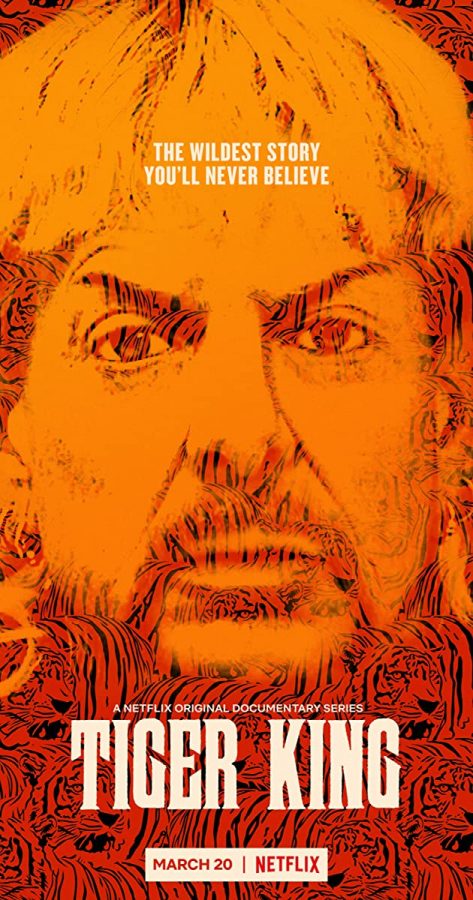 "Tiger King" is available for streaming on Netflix.

While stuck at home, there’s no better time to learn about the oddest corner of the country and see what all the hype is about- that’s right, Tiger King.

On Mar. 20, Netflix dropped one of the most interesting docu-series that has become a popular trend across social media as we are all stuck at home desperate for entertainment. According to IMDb, the show was the number one trending show on Netflix for a record number of days

Like a car accident, it’s hard to look away from this show. We’re introduced to the world of big cat collecting from the start and shortly introduced to the so-called “Tiger King” or “Joe Exotic”. With this, there’s no looking away.

While Joe Exotic is deemed the star of the show, there’s nothing boring about any of the other characters. With the introduction of big cat captivation in the US, the show is largely based on the argument between people like Joe Exotic who own their own big cat zoo and the big cat activists, specifically Carole Baskin.

While Carole Baskin holds on to the title of a big cat activist, viewers learn that she isn’t so innocent. In episode three, the show dives into Carole’s past with a case that was closed on what happened to her husband, Don Lewis.

Most people believe she killed her husband and both the evidence presented in the show and her shy and non-defensive interviews point to this conclusion. Carole most likely killed her husband for a wealthy inheritance, and this is obvious as she changed his will to have his money left to her.

Since the airing of Tiger King, Don Lewis’s case has been reopened for further investigation. This comes with much fuel from people at home demanding on social media that Carole was guilty.

As interesting as Carole Baskin’s personal case was, the show moves forward with introducing the case between Carole and Joe, who are the biggest rivals of the show.

With this rivalry, it’s hard to choose a side. At first, it’s easy to think you’d be on the side of the animal activist. But quite frankly, Carole’s Big Cat Reserve doesn’t seem too different from the big cat captivation she fights to take down. After all, big cats are held in cages and open to public viewing.

Learning about what led Joe to open the zoo like this, he opens up about his past and how he struggled coming out as gay and tried to end his life. Joe was introduced to owning his own big cats and it became a hobby. So, it’s enlightening to see how happy he seems at the beginning of this show with his tigers and husbands.

Joe had always joked about seeing the day Carole Baskin was dead, even on his YouTube broadcast show. But it was still surprising to see him go as far as to hire a hitman. When Jeff Lowe was introduced to take part in running the zoo with Joe for financial help, it seemed shady from the start, especially as his friend Allen Glover looked like this wasn’t his first planned murder assignment.

Nonetheless, he began his private zoo in Oklahoma with the intent to live out his dreams of raising tigers being a show personality. So, it’s disappointing to see this taken from him by the end of the show, especially as the zoo is now in the hands of the hands of Jeff Lowe and his young wife Lauren.

But the irony of it all is that now that “Joe Exotic” is a household name, he’s locked up behind bars unable to ride out the fame.

What’s even more interesting is the mess that got him behind bars is hardly because of tigers. The fight to protect his zoo from being shut down by Carole Baskin and People for Ethical Treatment of Animals (PETA) got lost in a bitter fight between Joe and Carole as people.

As the case unraveled and Joe tried to argue against his premeditated murder and murder for hire charges, we couldn’t say he was served an injustice, as he did commit this crime. But what’s upsetting is that Carole Baskin hadn’t gotten her fair share of consequence.

While the show became eerie and murderous quickly, the rather enthralling part is about the people who worked at the Greater Wynnewood Exotic Animal Park and were just as passionate about the big cats.

The G.W. Zoo crew was described as a group of misfits. These people were genuine with care for the zoo and animals, no matter what mess Joe had gotten into. This includes Saff who lost his arm to a tiger on the show, John Reinke who has no legs- not tiger related, and Erik Cowie and his long blonde hair.

As Joe had been experiencing enough on the show, he also lost both of his husbands. They both turned out to be straight and while John Finlay still is a good friend of Joe, Dylan committed suicide while at the zoo, one of the most intense parts in the show.

There are numerous people who add to this complex reality. A rather interesting person in the big cat private zoo world is Baghavan “Doc” Antel and his cult-like zoo. A quick look into the way he trains his female workers and cats to put on a show leaves us curious how he avoided a mess of investigations for himself.

As far as the personalities go, the biggest thing that kept us all looking at the screen was the impeccable styles of the characters. Whether it was James Garrettson and his slick straight red hair or Joe’s eyebrow piercing barely hanging on, the sight was never boring.

Every personality introduced in the series had an interesting role. At the start of the show, we are introduced to Rick Kirkham, who tried to produce his own show about Joe before his recording studio was burned down, allegedly by Joe. Rick continues to give commentary and the insider view into what he saw while working with Joe.

It’s no wonder that even after Rick’s own production of Joe never got released, he supported Netflix’s production of the show. After all, this is a story the world needs to hear.

While we all would love to be at a real zoo or maybe on a jet ski like James Garrettson at the end of the series, this will surely be worth binge-watching at home.