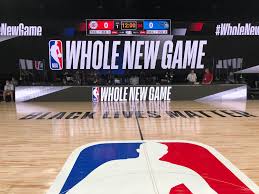 A court used for the NBA Restart. (Photo Credit: NBA)

Like many other things this year, the season in the National Basketball Association has been like no other.
After the season shut down on March 11 due to the COVID-19 pandemic, the league was shrouded in uncertainty. Fans were taken on a rollercoaster of emotions as various reports emerged of the season possibly being scrapped.
However, on July 30, the season officially started again. Twenty-two teams assembled in a closed campus at Disney World, nicknamed “the bubble,” ready to pick up the season right where they left off.
The set-up was simple. Each team played eight games to determine seeding. If the ninth seed in a conference was within four games of the eighth seed, a do-or-die game would be played to determine the eighth seed. The playoffs would then resume as normal with best-of-seven game series.
Rigorous testing protocols and a strict limit on personnel in the bubble suggested that the season may be able to survive. It was not the perfect solution, but NBA basketball was back.
Players had reservations, but were generally glad to be back. Many were concerned about their mental health, and were not keen on being isolated from their families for months.
Chief among them was Los Angeles Clippers star Paul George. Throughout his time in the bubble, he battled anxiety and depression. After some poor performances during the playoffs, he told reporters that he felt trapped.
While his teammates did their best to support him, his struggles continued. He was not able to perform at the level expected of him, a key factor in the title-favorite Clippers getting eliminated in the second round of the playoffs. Unfortunately, George was not the only player to undergo the same issues.
Even superstars like LeBron James admitted to having a difficult time in the bubble. As his Los Angeles Lakers team underperformed to begin the restart, pressure was put on the star to lead them out of it.
However, James and the Lakers rallied together. In the playoffs, they took down competition with ease, gliding to the Finals in style.
Stories like this were seen across the league, too. Whether it be the Miami Heat beating all odds and making the Finals, or the Phoenix Suns playing their best basketball of the season in the bubble, teams came together in the bubble.
Even bigger than basketball, the Black Lives Matter movement took center stage. Players once again came together in protest with the movement, wearing messages on the back of their shirts, and using their voices to advocate for change in America.
The movement culminated in a strike of games following the shooting of Jacob Blake. Led by the Milwaukee Bucks, the league went on strike during the first round of the playoffs.
Like many other things this season, it was unprecedented, and got a reaction from both fans and people outside of the game. Ultimately, it was effective, with the players accomplishing the goal of starting discussion about racism and prejudice in America.
In addition, the NBA Players Association met with the league and convinced the administration to devote more resources to the BLM movement.
The NBA has long been referred to as the biggest family in the nation. If nothing else, the restart has proved that saying comprehensively. Whether in their own individual team or in the league as a whole, players were each other’s keepers in the bubble.
Even though this has been a season like no other, the brotherhood of the players has not changed. In a time of division and strife in America, perhaps there is a lesson to be learned from the NBA.