Does the U.S. have the right to ban TikTok? 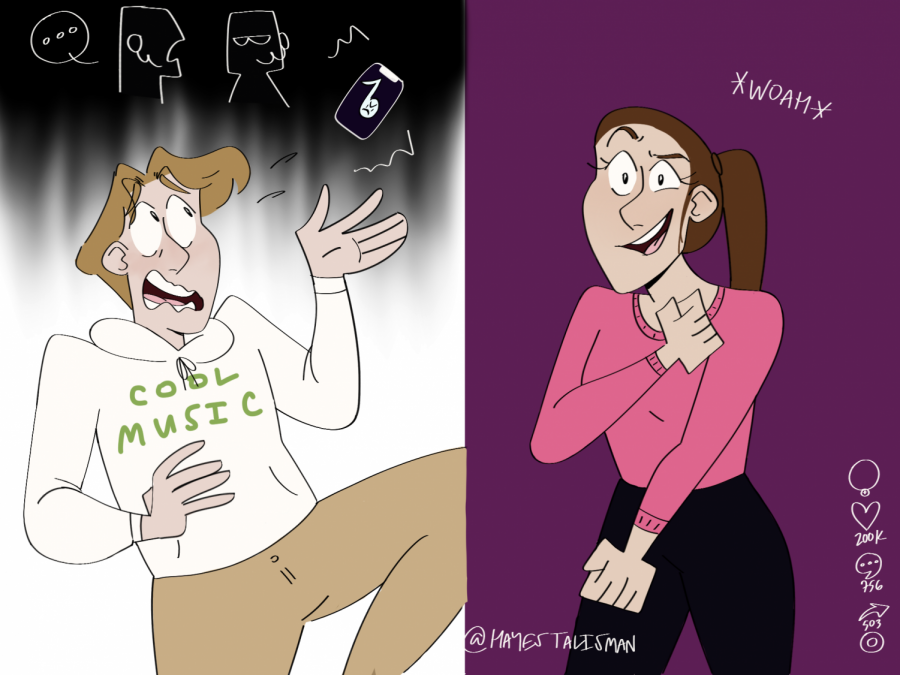 Two teens experience the positives and negatives of the popular social media App, TikTok. This drawing depicts the viewpoints of the authors of the point-counterpoint.

NOTE: This story is part of a Point/Counterpoint Opinion. Check out this link to see the other side!
On the surface, BytDance’s “TikTok” may seem like a completely normal social media app, similar to that of Vine or Instagram. However, below its surface of trendy dances, memes, and celebrities lies, are lines of code that raises high concern for all of its users’ personal information.

The question still remains, however: does the U.S. government actually have the legal right to ban the app in this country? The short answer is yes. The National Emergency Economic Powers Act of 1977 would allow the President to ban the app  because of its Chinese source. This route would leave TikTok banned in the U.S. until the issue is resolved in Congress.

That’s not the only way the U.S. could legally ban the app, though. The National Security Act of 1947 would allow the government to label the app as a threat to national security and would work out about the same way as mentioned before, but the government would have to disclose why the app raises a threat to national security in the first place and it would be much easier for the president to declare an emergency.

However, the security risks of TikTok have been discussed long before the president raised his own concerns.  Around 6 months ago, a user on Reddit named bangorlol described in high detail his experience with reverse engineering the app and what they found in the layers of code comprising the app.

In the comment thread by bangorlol, they describe TikTok as a “data collection service that is thinly-veiled as a social network” claiming that TikTok uses every data collection API possible to get information on you, your contacts, your device, other apps you have installed, every wifi connection you’ve ever had, and your constant location (being updated every 30 seconds).  The user has also claimed to have reverse engineered multiple other social media apps like Instagram, Facebook, and Twitter stating that, “They don’t collect anywhere near the same amount of data that TikTok does … It’s like comparing a cup of water to the ocean – they just don’t compare.”

It is concerning that ByteDance harvests the amount of data it does, especially when it can’t even keep that data secure. Only recently did TikTok use https for encryption, and this led to many users’ emails, real names, and birthdays being publicly accessible to anyone with enough know-how to get their hands on it.

Data collection isn’t the only thing you should worry about. The app is also very intrusive to the device it’s installed on. Bangorlol claims that the android version of the app contains code that allows for the downloading of a remote zip file, unzipping it, and executing the file. This is the same action that malware programs take on computers and there is no tangible reason for a social media app to have this feature.

However, don’t consider yourself safe even if you run the app on an iPhone. On June 24, a Twitter user using the iOS 14 beta uploaded this twitter video showing that the app was copying the users’ clipboard on every keystroke they made. Now ask yourself what reason an app would have a feature like that unless it were to steal a user’s data.

TikTok might be the cure for many teens’ boredom this quarantine, but it also poses a high security threat no one should take lightly. A person’s data is more valuable than oil in the age of the internet. You should make it common practice to keep your data secure and out of hands who would misuse it.