Opinion: Why the term “super straight” is disrespectful 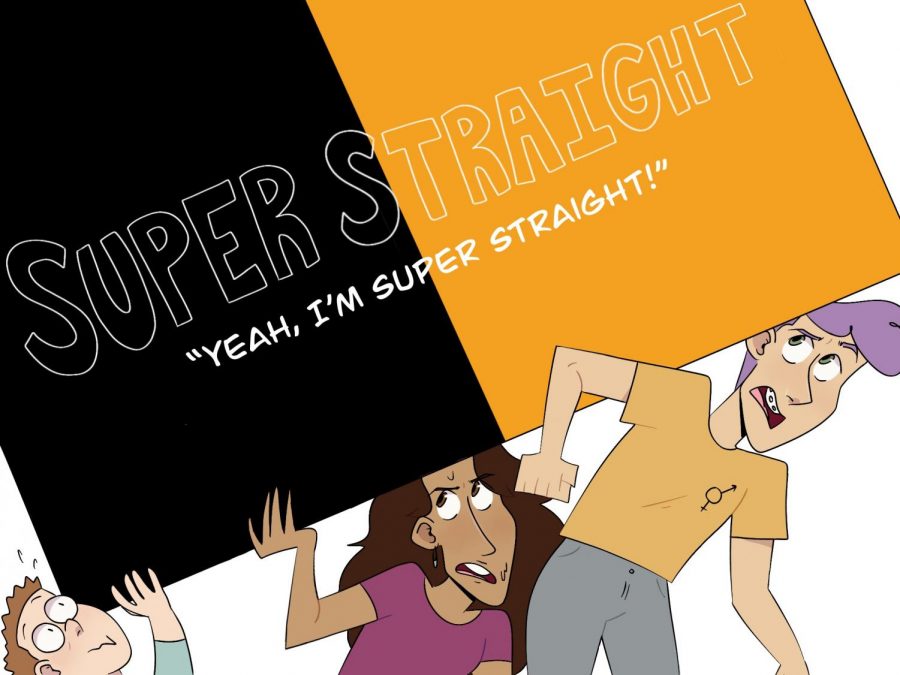 The new classification of being "super straight" makes light of the struggles LGBTQ+ individuals face when coming out.

“Super straight” is a term used by people who are only attracted to a person who identifies as their born gender. The term “super straight” has been used to show discrimination against transgender individuals, or those who identify with a gender opposite the one they were born with.
While this term was initially a harmless joke, it is now being taken seriously and is being considered a real sexuality. Such a term makes light of a serious issue and is disrespectful to the LGBTQ+ community.
On February 21, TikToker Kyle Royce posted a video talking about how he made a new term called “super straight.” The since-deleted video quickly blew up and has since been re-uploaded to multiple social media platforms. After all the backlash, Royce quickly took down all of his videos talking about his “new sexuality.”
Since the video first went viral, many individuals have “come out” as “super straight,” not realizing how offensive and ignorant the term is. They have even made a “super straight” flag.
The videos that are being uploaded are taking power away from the LGBTQ+ community. Coming out is a special rite of passage for individuals in the LGBTQ+ community, where they are finally able to open up to friends and family about who they are. This new terminology makes a mockery of the community and the people following this “super straight” trend don’t understand the pressure and strength it takes to come out. People are living in constant fear of not being accepted, being harmed, and facing discrimination against them just for their sexuality or how they identify.
If an individual is thinking of coming out as a member of the LGBTQ+ community or has in the past come out, think about how silenced they feel now that heterosexual men and women are “coming out” as “super straight.” For LGBTQ+ individuals, coming out gives people a chance to open up and it gives individuals a sense of empowerment and confidence showing the world who they are. Now that right is being belittled.
If someone comes out as transgender, they are no longer their born gender. To disregard someone’s pronouns is disrespectful, thoughtless, and just shows how uneducated a person can be. People are who they are, love who they love, and no one will ever have the right to take that away.
Saying you are “super straight” is like saying you will only date girls with blue eyes and short hair. No matter what someone’s preference is, we should focus on accepting someone and respecting them whether we know them or not. They are human and deserve respect.
Although the video may have started as a joke, since the video blew up, many individuals have taken the term very seriously. This term is encouraging transphobia and devaluing all the work the LGBTQ+ community has done to be accepted and have their voices heard.
It has been six years since the U.S. Supreme Court ruled all same sex marriage bans as unconstitutional. Yet even now, there is still work to be done when it comes to people making jokes about the LGBTQ+ community and being outwardly discriminatory towards the members.