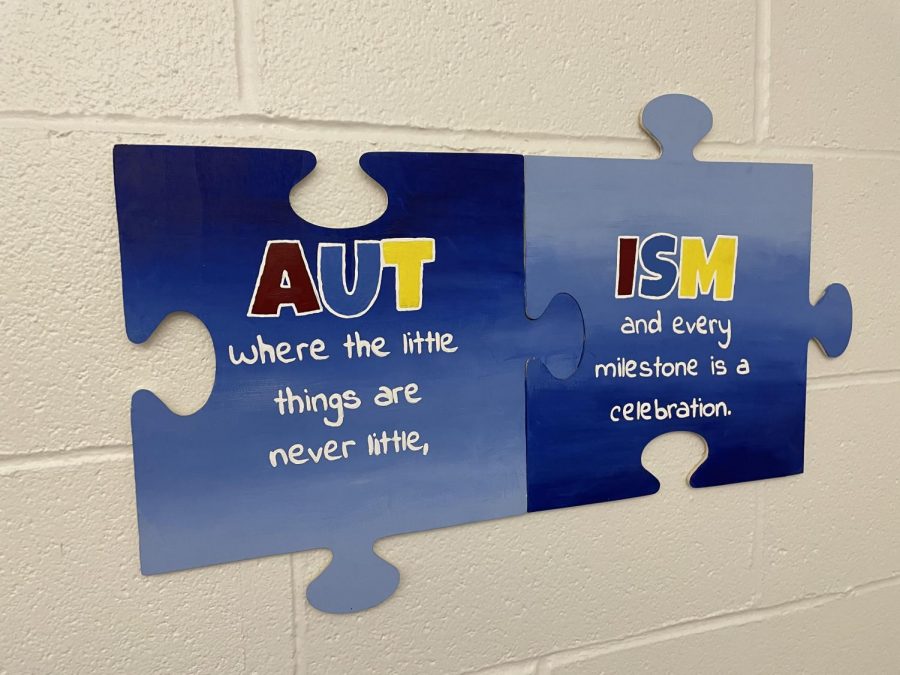 The month of April is Autism Awareness Month. The month is dedicated to bringing awareness to the developmental disorder that affects one in fifty-four children in the United States.

According to Jen McCoy, a transition room teacher, it is important for Hayes staff and students to learn about Autism Awareness Month to educate themselves on this disorder to be accepting to students with autism.

“Autism Awareness Month just brings recognition, awareness and support to the students at Hayes who have autism, and it shows them that they have friends, that we understand them, and they are supported,” McCoy said.

Cassie Bair is the mother of senior Lorin Bair, who has a more severe case of autism. She said this month also helps parents of autistic children help spread awareness of challenges of independence their children face daily.

“For Lorin, since she won’t be able to drive, and her social skills aren’t where a typical kid would be at her age, we are having to rely on public transportation, private transportation or us taking her where she needs to go,” Bair said.

With autism being a spectrum disorder, it can look different to every single individual. Evan Sidders, a junior at Hayes, was diagnosed with autism when he was 9.

“I can’t tell you how many times I’ve been told that I don’t look autistic,” Sidders said. “Well that’s because when it comes to that, people have preconceptions that autism should be a certain thing, and look a certain way.”

Autism Awareness month also sheds light on the differences children with autism have socially and emotionally.

“A lot of students at Hayes with autism have little quirks that make them different,” McCoy said. “A lot of times, students kind of obsess on topics that are an interest to them, so they have a hard time making connections with people outside of [the transition classroom].”

Sidders said that although some kids with autism may have differences, it’s important to treat everyone the same.

“We shouldn’t look at a person as being less when it comes to autism,” Sidders said. “If you want to be better educated about it, you need to look at everything about a person with a grain of salt.”

One way for Hayes students to be involved with students who have autism is by becoming a peer mentor. Peer mentors build relationships and become friends with students in the transition classroom.

“They’re just part of my life, and I just love hanging out with them because they’re so fun,” said Sophia Midura, a peer mentor.

According to McCoy, Hayes students can also be involved by showing support to students with autism, and by developing relationships with students in the transition room.

While Hayes has taken lots of steps to promote inclusivity, Bair said there is always room for improvement to continue building inclusivity schoolwide.

“Wearing blue for the month of April because that is their signature color, [or] just getting to know the autistic kids. Sometimes they don’t have many friends or the only friends they have are each other,” Bair said.

Wearing blue is a visual sign of support to the students in the transition room.

“[Kaden Leach] has been very excited about it and he’s asking that our students wear blue,” McCoy said.

Bair said that being educated about autism and accepting students with autism is crucial.

“I’ve grown to accept it because I know that I may be autistic, but autism is not me,” Sidders said.

Sidders also made a presentation about autism, and encourages everyone to watch and reach out to him if they have questions.