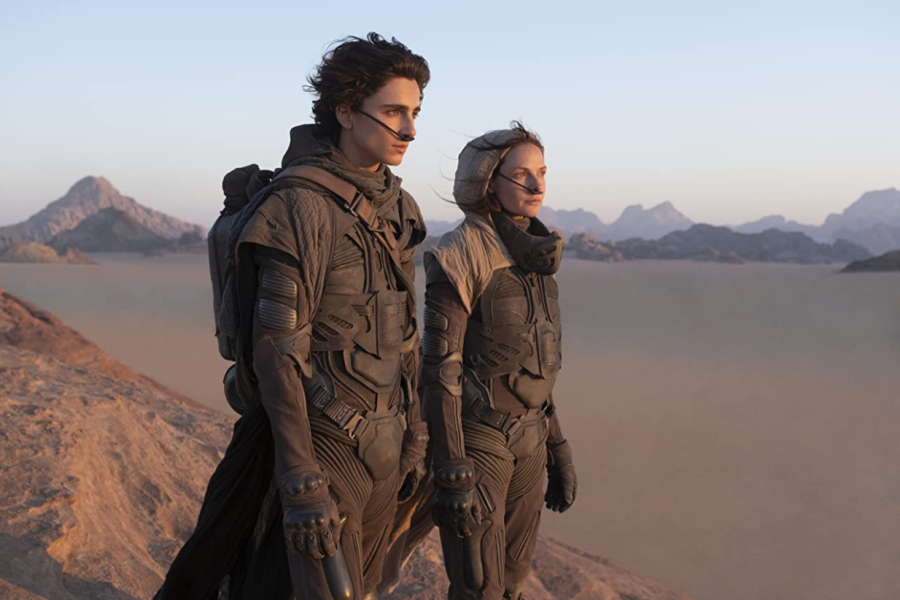 Paul (Timothée Chalamet) and Lady Jessica Atreides (Rebecca Ferguson) look across the desert planet of Arrakis in "Dune." The film is now playing in theaters, and available to stream on HBO Max.

This is only the beginning.
These are among the final words spoken in “Dune,” Denis Villeneuve’s new adaptation of Frank Herbert’s sci-fi classic, and they speak to the film’s greatest triumphs, as well as its main weaknesses.
The film, starring Timothée Chalamet, Rebecca Ferguson, Oscar Isaac, Zendaya, and more, is now in theaters and streaming on HBO Max.
From the instant “Dune” was announced, anticipation was rampant. To see such an acclaimed director as Villeneuve take on one of the most beloved novels of all time was mouth-watering, and this excitement was doubled upon the reveal of the film’s nearly unmatched ensemble.
However, Villeneuve was very clear about one thing from the beginning: In order to tell the story properly, he had committed to telling only half of the book’s plot in the film, with a second film to finish the story waiting to be greenlit.
Herein lies the largest issue with the film: it is simply incomplete.

Events are set up with no real payoff, characters are not developed to their fullest extent, and the story ends on a cliffhanger. The entire film must be watched with the fact that it is only the first part in mind, because “Dune” would fall flat if not.
However, regardless of the incomplete nature of the film, “Dune” stands as a true marvel of science fiction filmmaking.
Like in Villeneuve’s previous films, like “Arrival” and “Blade Runner 2049,” every single frame of the film is an absolute feast for the eyes. Everything from shot composition to color grading is absolutely marvellous, and the film cannot be described as anything but beautiful.
In addition, the sound design is wonderful. Whether it be a subtle piercing whistle indicating that a character is in danger, or an incredibly loud spaceship flying overhead, the entire film sounds like it could be happening right in front of you.
Meanwhile, the score, composed by Hans Zimmer, incorporates different elements like bagpipes from House Atreides and tribal screaming from Fremen women, producing something that sounds so closely tied to the world of Arrakis.
There are slight problems with the mixing, because the score drowns out dialogue at certain points. Ultimately, though, I cannot count this against the film because the strength of the score supersedes these issues.

All of this contributes enormously to building the world that the characters inhabit, and in the end, this is the film’s biggest achievement. In adapting infamously dense source material, Villeneuve took on a serious challenge.
While there are exposition dumps at times, much of the information is given to the viewer in an incredibly streamlined and organic manner. Almost every scene is packed with some essential information, but it is hard to realize because the care and effort that has been put into building the world of “Dune” is simply so fascinating.

The messy, intricate web of secret alliances and the conflict that surrounds them is utterly entrancing and fleshes out how this universe ticks.
Of course, the film is delightfully dense with lore outside of this that sci-fi fans will be sure to devour, whether it be the magic of the Bene Gesserit, or the livelihood of Arrakis’ Fremen.
It is important to note that “Dune” is a slow film. There is not action occurring every second of the film, and Villeneuve is content to carry us through the events at his leisure, showing us every detail of Arrakis along the way.
For many, though, this will be no issue, and sci-fi lovers will be far too fascinated by the world he has built to mind.
Ultimately, they are who this film exists to serve. The film is the sci-fi fan’s pure wish fulfillment, pivoting often between thought-provoking, thrilling and heartbreaking, masterfully encompassing everything that makes so many love the genre.
No matter how slow it may be, and how much story there is left to tell, “Dune” is an insanely rewarding and enriching experience. If this is what Villeneuve has to offer, “Dune: Part Two” cannot come soon enough.