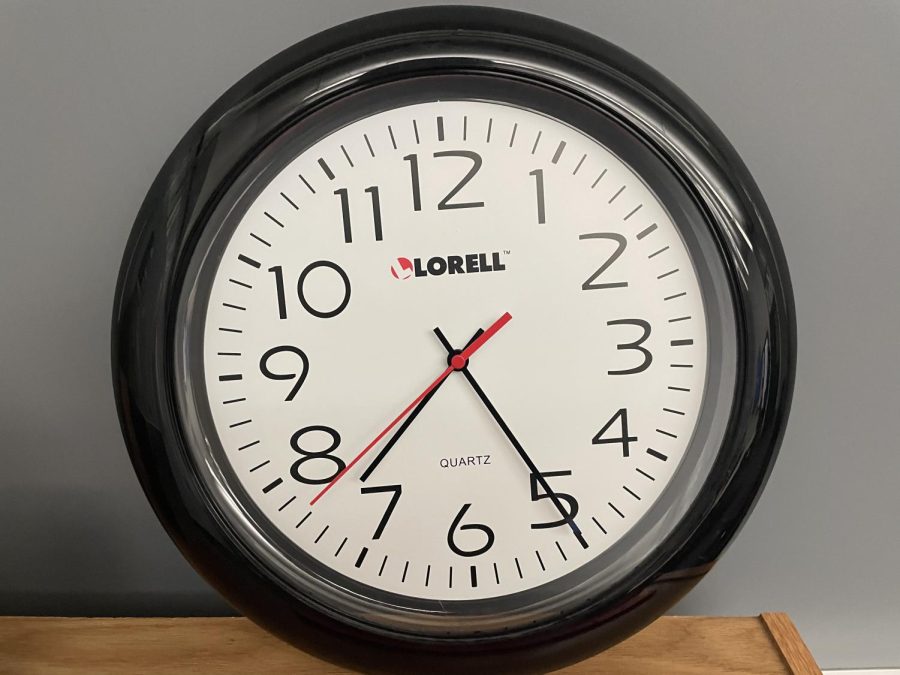 Clock at the beginning of the school day when the second bell rang at 7:25.

You roll over, eyes still blurry from having been asleep not two minutes ago. You feel around for your phone, which is buzzing and playing your alarm, and wonder why you should be up this early.
Statistically, you shouldn’t. School start times should start later.
Most high schools begin between 7-8 a.m. each day. When you add that many high school students shower before school, students are waking up way earlier than they should.
Sleep gives us balance and measure in life; waking up at 4:00 a.m. each day ruins balance and measure, according to an article by John Brandon for Inc.com. In the end, the lack of sleep catches up to you after a few weeks.
During the first week of a school year, many students tend to wake up early because of the excitement of not having many assignments and meeting new friends.
When the second week rolls around, students start to have a harder time waking up (or at least getting out of bed). And they do eventually pay for the lack of sleep that comes with waking up so early.
According to an interview with Robert Preidt in U.S. News, puberty causes changes to sleep cycles, which can make it harder for teens to fall asleep. Combined with early school start times, most teenagers aren’t getting enough rest.
Teenagers shouldn’t wake up before 7:00 a.m., and with school starting at 7:30, that’s about thirty minutes to get ready and to school, according to Eric Suni with the National Sleep Foundation. Some students might live close enough to the school to pull this off, but others have to ride a bus for more than half an hour to get to school.
Another issue with the start times is that most teens don’t fall asleep until sometime between 10 p.m. and 12 a.m. Teenage brains work differently and aren’t ready to sleep as early as they did when they were kids.
When you become a teenager, the body’s circadian rhythm is reset, making a teen fall asleep later and wake up later in the morning, according to Mary L. Gavin for Nemours KidsHealth.
What’s unfortunate is that school start times align better with adult circadian rhythms.
According to Mark Stibich for Verywell Health, when we age, our bodies make less of two important sleep hormones: Melatonin and the human growth hormone. Changes to melatonin can also have an impact on someone’s sleep schedule.
That means as you get older, you go to sleep earlier and wake up earlier.
Since most schools operate according to an adult’s circadian rhythm, how does that affect teens? Studies show that it’s not in a positive way.
According to the CDC, adolescents who do not get enough sleep are more likely to suffer from symptoms of depression, perform poorly in school, among other things.
Therefore, schools’ starting and ending times should operate on a teenager’s circadian rhythm. It’s better for student’s mental and physical health, and it benefits everyone by letting them sleep in more.