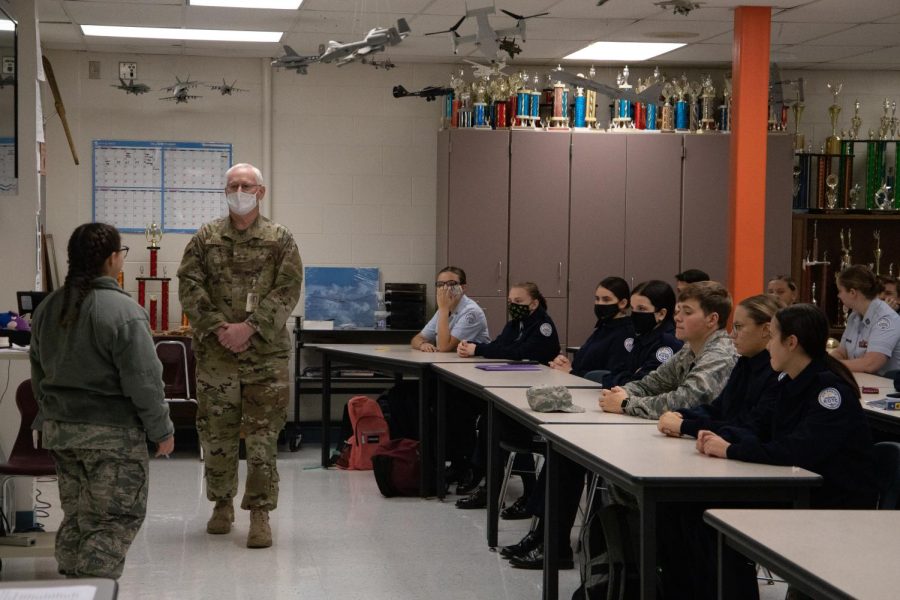 Senior Master Sergeant Manley has devoted 26 years of his life to teaching, with nine years being here at Hayes. This will be his last year at Hayes due to the fact he is retiring. In his time here, he has led the Delaware County drill team, the Phantoms, to win multiple awards at meets and touched multiple students’ hearts here at Hayes.
“He’s full of energy, He’s loved by the cadets [and] the staff in the school,” said Major Mathew O’Brien.
“[Manley] has always been there for all of his cadets,” junior Ian Browning said. “Whenever anything would happen, he would always put his cadets first and made sure to drive us to be the best we can be.”
He is respected by many and has made a new family for many cadets.
“There have been times where after school students’ have stayed in my room and I just look at them like, why are you guys here, why don’t you go home? And then they look back at me and say that they were home,” Manley said.
Manley’s coworkers said he has always put his students first and constantly did what he could to help them succeed.

“He definitely made his mark on Hayes High School and the county as a whole program,” O’Brien said. “He’s well known, he’s well respected, the cadets love him and I think the school is going to miss him.”
Manley is retiring this year to spend more time with family and to dedicate more time to the things he loves such as bowling and golf.
“I really enjoy bowling,” Manley said. “Plus I like to golf, so I’ve been working at the golf course down, or working my way in with them. They said as soon as I’m ready just let them know.”
Although not much is going to change with the AFJROTC program here at Hayes, there will definitely be a missing part of the program.
“I’ve been doing AFJROTC my entire high school career,” Browning said. “I don’t know an ROTC program without him.”
After Manley retires, there will be another instructor helping O’Brien with the AFJROTC program.
“I don’t anticipate making a bunch of big changes,” said O’Brien, “I think everything that they set up is well done.”
O’Brien said that hopefully by mid-springtime they will have another instructor in place for the following year.
“It’s going to be hard for sure transitioning from having him there versus without him, but hopefully the next instructor is just as good,” Browning said.
Given Manley’s tenure at Hayes, he’ll be missed by many cadets, students and staff as he moves into retirement.
“It’s going to be tough to replace him,” O’Brien said. “But I wish him all the best and I respect the fact that he wants to get closer to family and do some different things with his life. So it’s a double edged sword, losing him, but I also respect what he’s trying to do in the next phase of his life.”