Pandemic Fatigue: Why we’re all tired of following health protocols 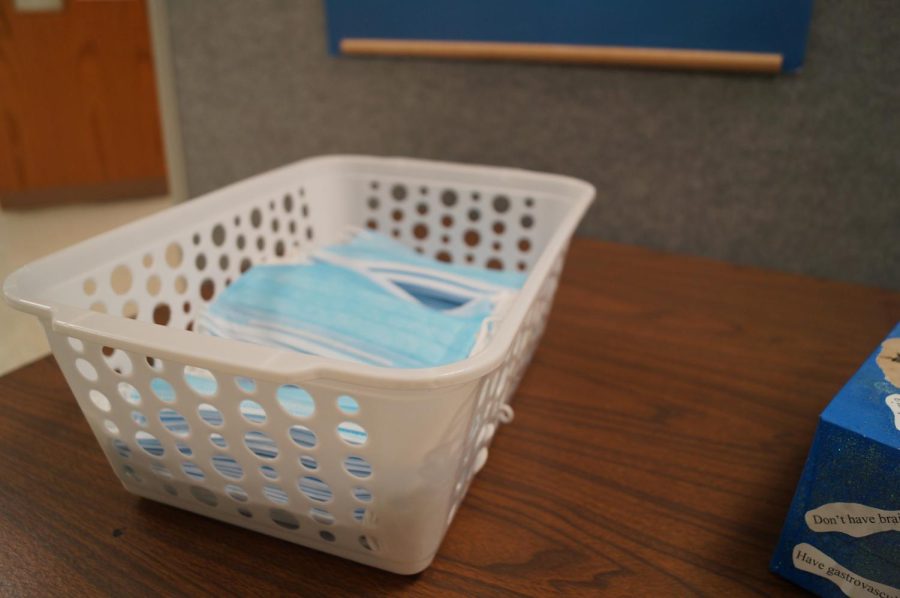 DCS is one of the only districts in the county requiring masks for students grades K-12. Although N95 and KN95 masks are now recommended to best protect against Omicron, DCS does not require a specific type of face covering.

With the highly contagious Omicron variant, health protocols are as important as ever, however, not everyone is still following them.

Pandemic fatigue, as defined by the World Health Organization, is the gradual demotivation to follow recommended health and safety protocols. While pandemic fatigue is considered a natural and even expected reaction, especially with the pandemic having stretched on for nearly two years, it poses a threat to the control of the spread of the Covid-19 virus.

At the start of the pandemic, people followed protocols relatively consistently.

According to the WHO, people were likely utilizing their surge capacity, which is a collection of mental and physical adaptive systems that can be used for short-term survival in stressful situations that are brief. However, surge capacity isn’t meant to last for months on end.

For many individuals, the duration of the pandemic has been disheartening and tiresome.

“In the beginning, everyone was keeping up to date with the virus often, but I think most people are burnt out on keeping up since it has been around for a while now…” junior Natalie Edwards said. “I believe people have accepted that it could become something like the flu that’ll stick around for quite a while.”

However, the future of the pandemic isn’t completely certain with the current Omicron variant, and more variants could create complications.

Although the Omicron variant tends to produce mild symptoms in people who’ve been vaccinated, it’s more contagious than past variants and can be severe for certain populations, especially elderly people, unvaccinated people and people who are immunocompromised or have underlying health conditions.

According to school nurse Eileen Duffy, cases are currently falling in Delaware county, but she said students should still be mindful of health protocols.

“Masks are still important to wear. Who you hang out with does define you sometimes, by health especially. If someone has been with a lot of people and then they’re with you, then your risks of getting Covid increase…” Duffy said.

According to Duffy, DCS is one of the only districts in the county currently mandating masks for pre-K through high school.

Recently, the CDC recommended wearing N95 or KN95 masks to best protect against Omicron, but students are not required to have a certain type of mask.

For senior Natalia Sanclemente, wearing a mask is not just to protect herself, but also to protect others.

“My brother had [Covid] two weeks ago…I heard my brother coughing…and it just sounded horrible and I don’t want anyone to experience that, especially with someone who has underlying health conditions, because then they could experience something worse,” Sanclemente said.

“I’ve been wearing masks more often in fear of catching anything and giving it to my family members with health conditions that can seriously affect them…” Edwards said. “Omicron has given me a chance to realize that it most likely will not go away too soon, so everyone has to do what they can to protect their members from serious effects.”

Although Duffy said that mask compliance is fairly good within Hayes, she said this isn’t necessarily the case around the county.

“I think people habituate, they figure it’s not changing, or they think, ‘it hasn’t happened to me’ or ‘it’s already happened to me’ or they’re fatalistic: ‘it’s going to happen to me no matter what.’” Duffy said. “I think people are tired, they want to go out and be with their friends… there’s so many people that want their life back. They want personal choice back.”

With so many restrictions, some people feel as though they’ve lost a lot of autonomy.

However, pandemic fatigue isn’t solely influenced by mental state; it can also be influenced by social norms and political distrust.

Since not all places enforce mask wearing, it can feel easier to forgo wearing a mask, especially when other people are doing the same.

“I think a lot of people are tired of wearing masks, having to quarantine and constantly worrying about getting sick…” senior Kailyn Smith said. “People are just exhausted. They want this to end, and they don’t see when it’s going to stop.”

For Smith, the politics of the pandemic have become increasingly frustrating.

“When the pandemic turned into a political issue, suddenly people stopped listening to science or medical professionals, and instead listened to what their favorite politicians were telling them…” Smith said. “The fact that there seems to be a new variant every other month and that people are still acting like it’s a political issue is ridiculous. It’s not.”

In terms of vaccination rate, Delaware has one of the highest rates. However, while vaccines protect against more serious illness, they aren’t foolproof and some populations haven’t been able to get vaccinated, such as children under five years old.

Pandemic fatigue or not, Duffy emphasized the importance of taking appropriate precautions to protect others.

“There’s light at the end of the tunnel,” Duffy said. “Things will get better and if [people] could just hang on and do the right thing, not necessarily what they want but the right thing for other people.”