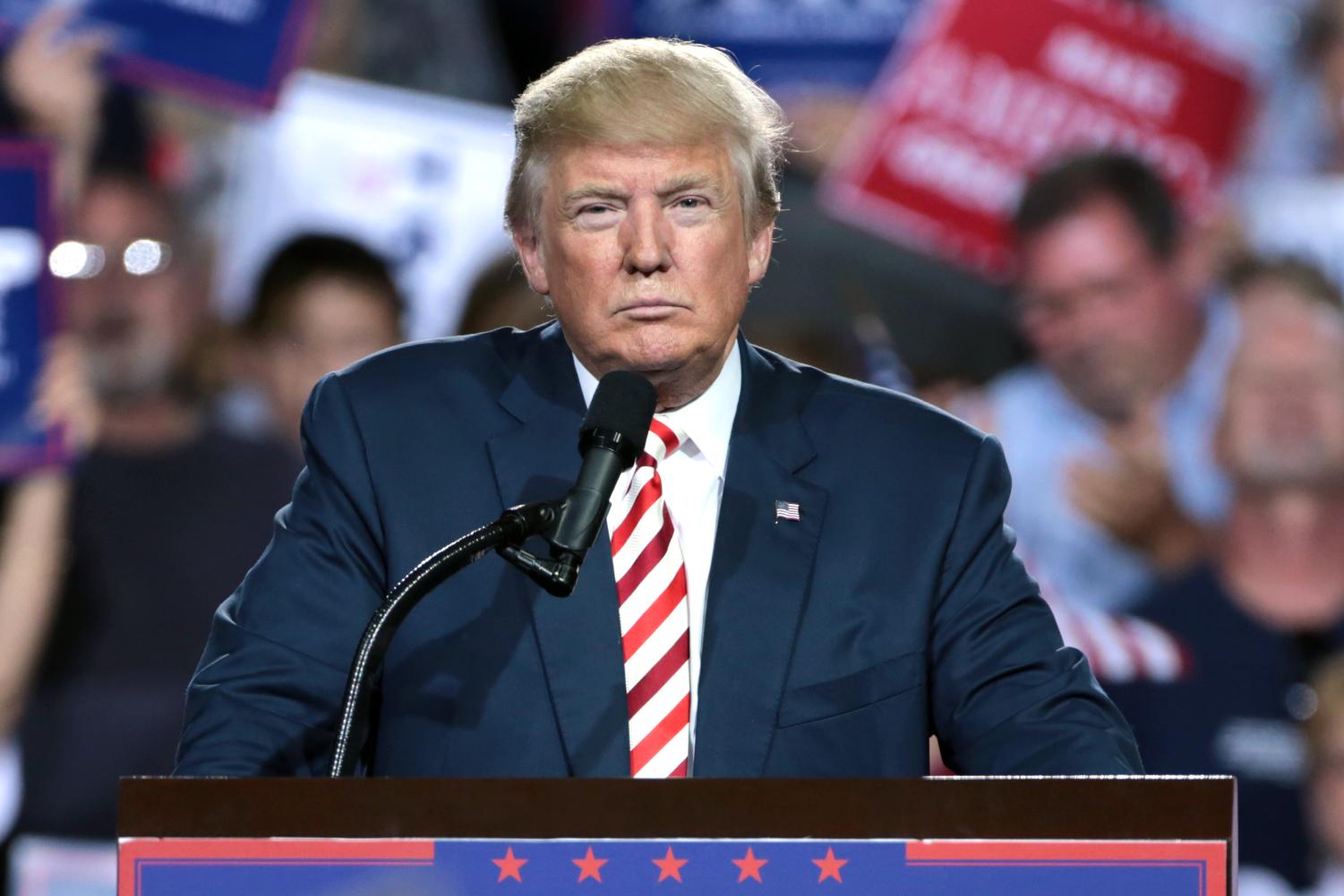 Trump running for election again is a good thing

Former President Donald Trump has officially announced the start of his 2024 campaign for re-election. Despite a few things against him, his immense strength still thrives. Trump running for president once again might be the best option for the country.
On November 8, 2016, Trump was elected President of the United States. He won more than 2,600 counties nationwide – the most since Ronald Reagan was elected in 1984.
After being impeached twice, publicly humiliated and disrespected, Trump has not once stopped his fight for America. He was the first president elected into office without any military or government experience, but that did not stop him.
Trump was the first president to run the country in a way that was professional, business-like, and beneficial to the economy. From the very start of his presidency, he used his presidential power to criticize the news media and government officials in both political parties.
Trump approached office knowing exactly what needed to be done to change his country for the better. Throughout his presidency, he achieved some of the biggest political and economic victories.
He accomplished the country’s biggest corporate tax cuts on record and the stock market was at some of its highest points, compared to past decades.
Comparingly, since Joe Biden stepped foot in office, tax rates have been at their highest, causing the stock market to plummet from those high trends and inflation to skyrocket.
The Biden administration was a key factor to this so-called “Bidenflation” as Democrats plunged through their $2 trillion partisan Covid stimulus. From this, inflation rose at its fastest rate in over 40 years. This caused inflation to outpace wages, and Americans received the biggest pay cuts in 40 years.
Inflation has reached its highest rates ever measured by the Consumer Price Index (CPI) in 2022, measuring at an increase of 8.6%. In response, the Federal Reserve has tried to lower these rates by continuing to increase interest rates, but has yet to show any progress.
Additionally, after Russia’s invasion of Ukraine, Biden’s administration decided to close gas lines connected to Russia (one of the biggest gas suppliers to the United States), while supply chains were negatively impacted, which caused prices of nearly all goods to aggressively increase.
As a result, Biden received a significant amount of bipartisan backlash, and now more than 34 million people in the United States cannot afford groceries. This is more than four times the amount of people that could not afford goods in 2021.
During Trump’s presidency, he also invested $2 trillion to completely rebuild the U.S. military in hopes to better protect our country and its citizens. Using money wisely, when the Covid-19 pandemic arose, the Trump Administration enacted the largest package of financial relief in American history.
Although many Democrats disagree with Biden’s presidency, many oppose Trump’s actions as well.
For example, Trump has had many sexual misconduct and rape accusations made against him, starting way before his presidency. However, he has yet to be proven guilty in any of his cases.
Additionally, Biden also has past sexual assault allegations. Sexual assault allegations are horrible to even think about, but when it comes to a professional standpoint, Trump has continuously shown entrepreneurial excellence and has continued to fight for his country.
On the other hand, Biden’s administrative team has continuously shown their cluelessness towards the basics of economics.
Trump is fully aware of how America needs to function, especially to get us out of the big hole that the country is currently in.
During his speech announcing that he will be running for presidency in 2024, he made good, specific points on America’s unity as a country.
“We were a strong nation, and importantly, we were a free nation,” Trump said at his campaign in Palm Beach, Florida. “But now we are a nation in decline.”
Trump clearly represented points and issues on how our country has been in decline through the duration of Biden’s presidency. As well as how he has and will contribute to our country’s strength and freedom.
It will be interesting to see the outcomes of the next general election. Yes, Trump is a great candidate for the presidency, but his ability to be re-elected and competitive spirit will have to be stronger than ever.

Donald Trump running again is an embarrassment to America

Having been born and raised in New York City, the business capital of the United States, Trump was set up for success. With a real estate and a television background, Trump was destined to be in a position of power. However, he became the only person to be elected president without previous military or government experience, and has shown that he should’ve stayed in the entertainment business.
Throughout his career, Trump has had many sexual assault allegations made against him.
According to NBC, an alleged victim was groomed at 14 years old when she was taken to Donald Trump’s hotel room by Jeffrey Epstein, who was charged with trafficking dozens of victims.
Trump and Epstein were in the same social circle, and were neighbors in Florida where some of Epstein’s alleged trafficking occurred.
In addition to this, Trump has made vulgar comments towards women on multiple occasions.
For example, Trump made comments about his own daughter, saying, “She does have a very nice figure. I’ve said if Ivanka weren’t my daughter, perhaps I’d be dating her.”
One of the most famous comments that he has made was during an interview in 2005 with television personality Billy Bush.
“When you’re a star, they let you do it. You can do anything,” Trump said. “…Grab ’em by the p****. You can do anything.”
He also said to Howard Stern that “a person who is very flat-chested is very hard to be a ten.”
Equally important, Trump has also made many racist remarks.
During the announcement of his 2016 presidential bid at Trump Tower, he stated that “[Mexicans are] bringing drugs. They’re bringing crime. They’re rapists. And some, I assume, are good people.”
Additionally, Trump said he wanted a “complete shutdown of Muslims entering the United States until our country’s representatives can figure out what the hell is going on.”
Equally important during the start of the pandemic, Trump referred to Covid-19 as the “Chinese virus” after that arguing that it isn’t racist to call it that.
Among those statements, he also called himself the “least racist person there is anywhere in the world.”
Furthermore, Trump said at a rally at the Sioux Center in Iowa that “[he] could stand in the middle of 5th Avenue and shoot somebody, and [he] wouldn’t lose voters.”
This comment alone shows how he doesn’t care about the effects of his actions. There is a heated debate on gun access taking place in this country, and this comment is extremely insensitive towards people who have been in mass shootings or victims’ family members. Another offensive action Trump has taken is to make fun of people with disabilities.
At one of his rallies, he was seen moving his arms in an offensive way to mock a disabled reporter named Serge Kovaleski, who has a joint condition in his right hand.
In addition to concerns about ethics and inclusion, Trump has also chosen not to release his taxes from before 2009.
Although candidates releasing their tax returns is not a requirement, it is a tradition to have transparency. Unlike his counterpart in the 2016 election Hillary Clinton, who released three decades’ worth of tax returns, Trump released nothing at all.
Trump’s problematic history seems to have had an effect on the voting population. In both the 2016 and 2020 elections he lost the popular vote.
However, in the 2016 election, he won the electoral college vote, earning 304 votes against Hillary Clinton, who earned 227 votes.
Despite losing the popular vote, Trump has nominated more justices to the Supreme Court than any other president since Reagan. During the middle of Trump’s presidency, Brett Kavanaugh was appointed to the supreme court. With this, he was given an inadequate supplemental background check. There were over 4,500 tips about Kavanaugh given to the F.B.I., and the Trump administration is holding over 100,000 pages of documents related to Kavanaugh’s past.
When it comes to international politics, Donald Trump’s track record is equally problematic. Notably, he frequently says he is “friends” with Vladimir Putin.
In the summer of 2021, he spoke of his time meeting with the Russian politician.
“I got along great with President Putin,” Trump said. “I liked him. He liked me.”
During the Helsinki Summit in 2018, Trump stated that he trusted Putin’s intelligence more than America’s.
According to CNN, Trump didn’t discuss that allegedly Russia offered bounties to the Taliban to kill U.S. troops while in Afghanistan. Trump said that it was “fake news” and that he didn’t have a problem talking with Putin about it, but ultimately he never did.
In addition, the wealth gap was an issue in the United States before Trump’s presidency, but while he was in office was absurd.

In 2019, well into his presidency, families in the top ten percent of the wealth distribution held 72 percent of total wealth, whereas the bottom half of the wealth distribution held 2 percent of total wealth. This proves the theory that rich get richer and the poor get poorer.
Not to mention, Trump has also become the only President in United States history to be impeached twice.
The first time, he was impeached for abuse of power in congress. The second time was for his involvement in the violent attack at the U.S. Capitol on January 6, threatening America’s democracy.
Before the January 6 riot, on December 20, 2020, Trump tweeted that there would be a “Big protest in DC on January 6th. Be there, will be wild.”
He also stated that “we’re going to have to fight much harder” and “we’re going to walk down to the Capitol… you have to show strength and you have to be strong.”
The January 6th riot resulted in at least 7 people dying and over $1.5 million of damage.
After the attack on the Capitol, a House select committee was established to investigate Trump’s involvement.
But the controversies haven’t ended since Trump left office in 2021. The FBI is currently investigating classified documents found in Trump’s West Palm Beach home, Mar-a-Lago.
These documents could possibly relate to the current investigation about him releasing top secret documents that could violate the Espionage Act.
Violating the espionage act could possibly be considered treason and pose a threat to the government and military services.
Donald Trump’s actions have proven that he shouldn’t be president. With his constant unprofessionalism, racism, sexism, and his inadequate style of being in a position of power, he is a disgraceful image of what America is like in the 21st century.