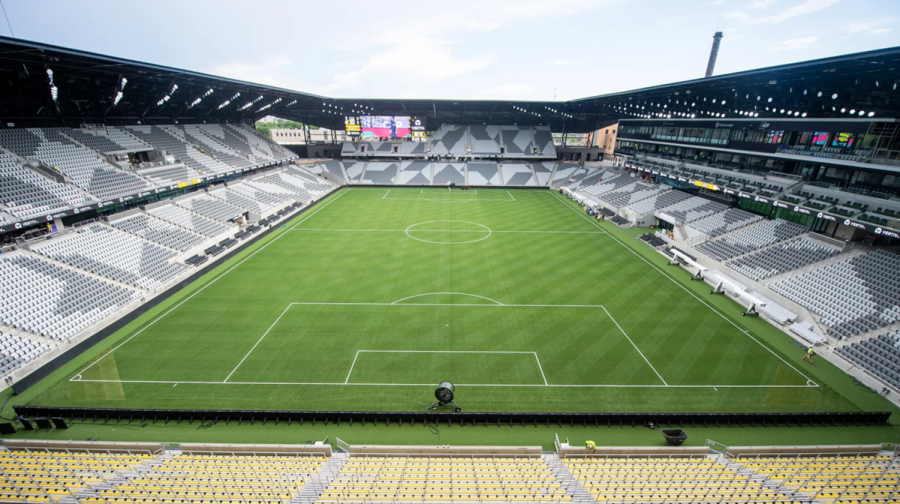 Lower.com Field sits empty, waiting for fans to fill it. The stadium officially hosted its first Crew game on July 3, 2021.

As the 2021 campaign began, Columbus played games at Mapfre until “New Crew Stadium” was ready for fans. The stadium played host to important matches until the end, serving as the Crew’s home matches in the CONCACAF Champions League.
Just as the club was as competitive as ever, with fan interest soaring, the identity of the team was once again challenged by management. In May 2021, the club announced that they’d go by Columbus SC, dropping the “Crew” from the namesake and rolling out a new logo.
Crew fans were insulted. Supporters dusted off their shirts from 2017, and #SaveTheCrew was once again trending. After the merchandise was boycotted and fans threatened to cancel season tickets, the club quickly changed their name back to Columbus Crew, dropping the SC entirely and going back to the original name of the team from the ’90s.
Amidst the controversy, the Crew heated up, losing only 2 MLS games in the first 11.

The community made the opening of the new stadium magical, just like it made the team itself over the years.”

On July 3, 2021, Lower.com Field (which had been called New Crew Stadium until a deal was struck with Lower.com) was the setting for a match between the Crew and New England Revolution.
The stadium was packed with the streets of Columbus also densely populated with Crew supporters as former Crew goalkeeper Zack Steffen led fans into a “March to the Match” through the Arena District.
As the stadium opened its gates for its first ever matchday, fans took in the beauty of the new soccer palace. Its new over-hangings provide cover for the seats, a useful feature against the elements. The new, lit-up concession stands and Crew Shop added a certain comfort to the concourse, and in the west side of the stadium, a trophy case with the team’s hardware reminded fans of the triumphs of last December.
The best parts of the stadium were the things that weren’t on the map, though. Like toddlers attending their first-ever game, sitting on their parent’s shoulders while being carried around the entrance. Or the youth soccer teams of the area walked around admiring the size of the square-shaped castle. Or even the full families with generations of soccer fans taking pictures of the momentous occasion.
The community made the opening of the new stadium magical, just like it made the team itself over the years.
The drums from Nordecke sounded in threes, matched with the clapping of the crowd. Three claps and the Crew loyal raised their hands in unison as they screamed “Columbus” as the team marched onto the pitch.
Captained by defender Jonathan Mensah, the league’s charter member walked out in the day’s kit: yellow socks, yellow shorts, and new grey uniforms with designs of the stadium’s architecture across the front, made for this year’s season.
The game ended in a 2-2 draw, but served as a victory for the city, solidifying the Crew’s status in the community and sending a message to the rest of the soccer world: Columbus was here to stay.