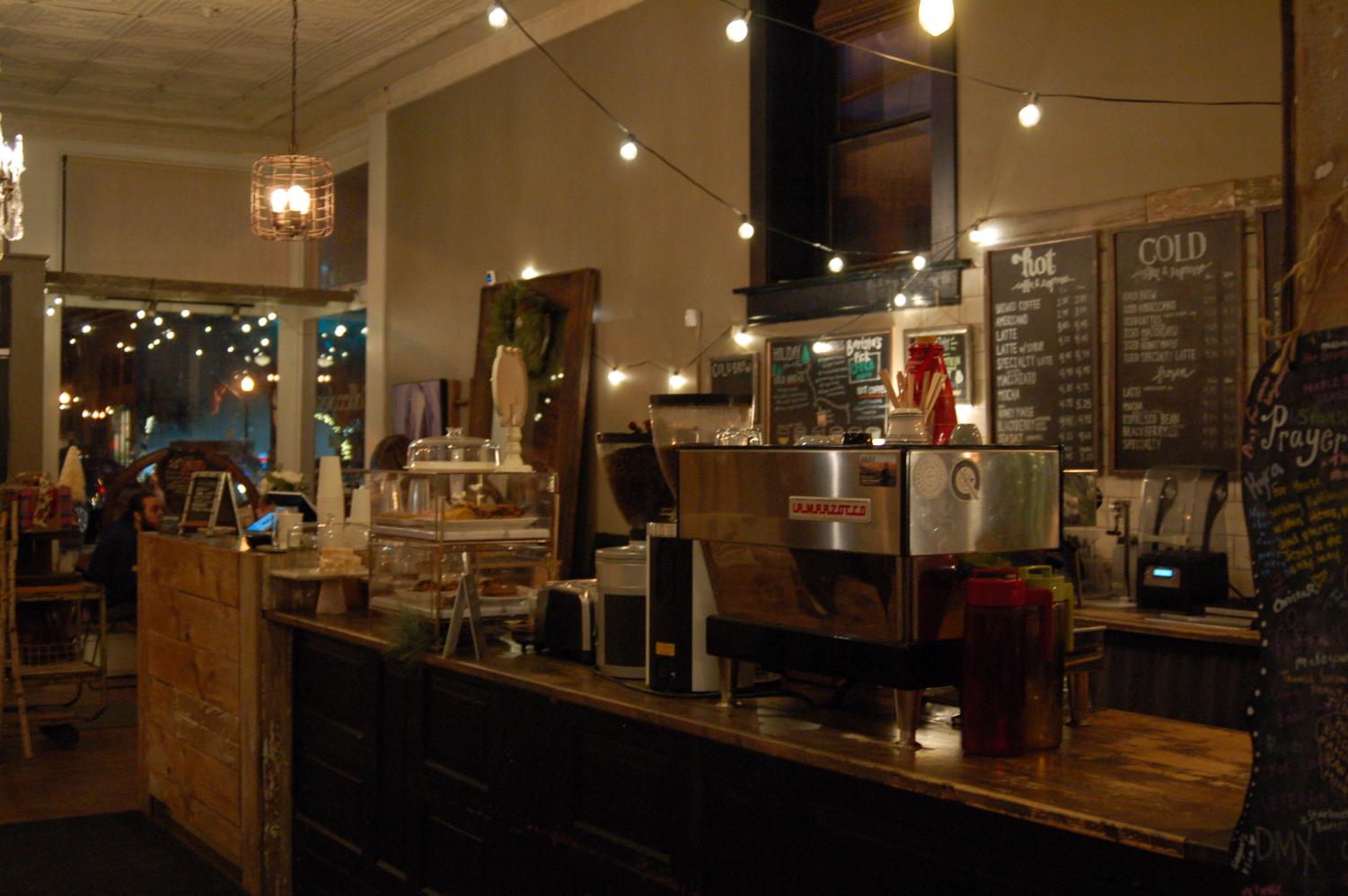 The bar where the baristas make the coffee and other drinks in Coffeeology. (Piper Baxley)

The bar where the baristas make the coffee and other drinks in Coffeeology.

Yet, a new battle emerges from an era of frosty hands and frothy drinks: the search for Delaware’s best coffee shop.

Although Delaware is home to many dedicated coffee outlets and cafes, some restaurants deserve recognition for their loyalty to caffeinated beverages and cozy aesthetics.

With decor that will make you say, “why’s that door there?” 1808 is a rustic, comfy and revolutionary destination for everything high-palate—and they have brunch!

Although their menu changes with the seasons, some classics stick around, including their freshly brewed black coffee.

The coffee may not be the star of the show, but with freshly powdered beignets or home-made biscuits, it shines like any other.

The restaurant derives its name from the year in which Delaware was founded, 1808, yet it feels larger than the small town it calls home. Swooping ceilings dotted with chandeliers that are dimmed to nothing, just barely illuminating a collection of little memories in the form of stunning photography and, needless to say, a giant black door placed at the helm of the main dining room.

It would be a disservice to not mention 1808 as a haven for breakfast enjoyers.

The 1942 painting “Nighthawks” coming to a main street near you, Hamburger Inn is a classic over-the-counter diner that’s seldom seen in most modern establishments. It’s a refreshing blast from the past, complete with well-loved decorum and superbly soul-warming food.

Although, it’s not just the scenery that’s old—the Inn is the longest-running diner in Delaware, originally opened in 1932 under the name of the “Senate Restaurant.” It was soon bought by the Hudson family, and known as the beloved “Hamburger Inn” ever since.

The restaurant is a staple of good home-style American food, with heavenly cinnamon rolls and a coffee club that’s been meeting there for over 50 years. 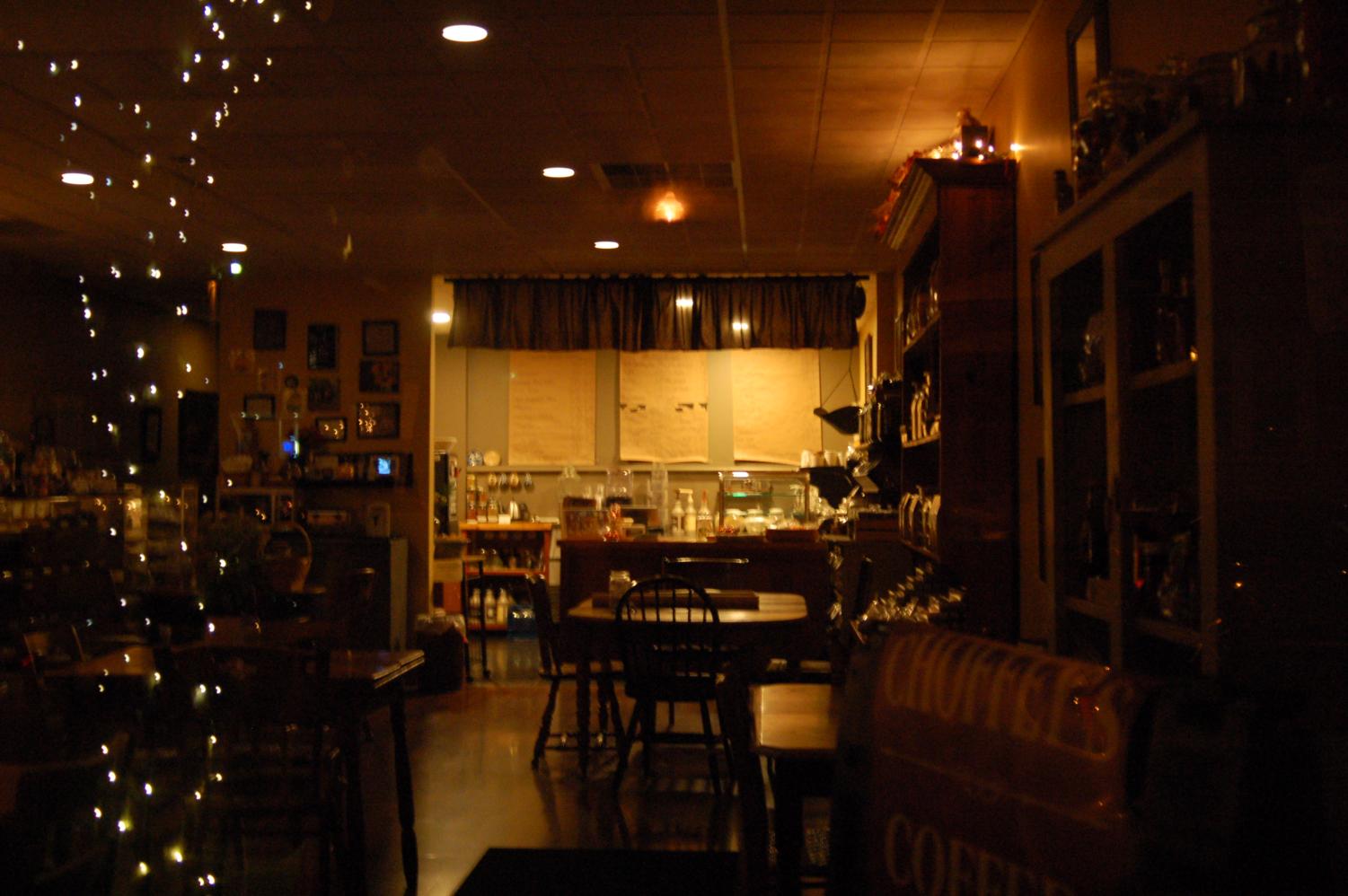 The inside of Choffey’s after they closed.

A break from “corporate coffee” chains, Choffey’s doubles as both an artisan cafe and a homegrown candy store.

Their chocolates and candles are locally made, with their dairy products supplied by Hartzler Dairy, a company originated in Wayne County, Ohio, located just an hour outside of Delaware.

Their hand-crafted drinks and candies may be a bit sweet for some, with a notably sugar-packed menu, but there are many unique snacks to try for anyone feeling adventurous and particularly sweet-toothed.

The shop is a Delaware classic and a prime studying location, with antique rocking chairs for those wanting to look sophisticated and comfy at the same time (while gorging on caramel popcorn). 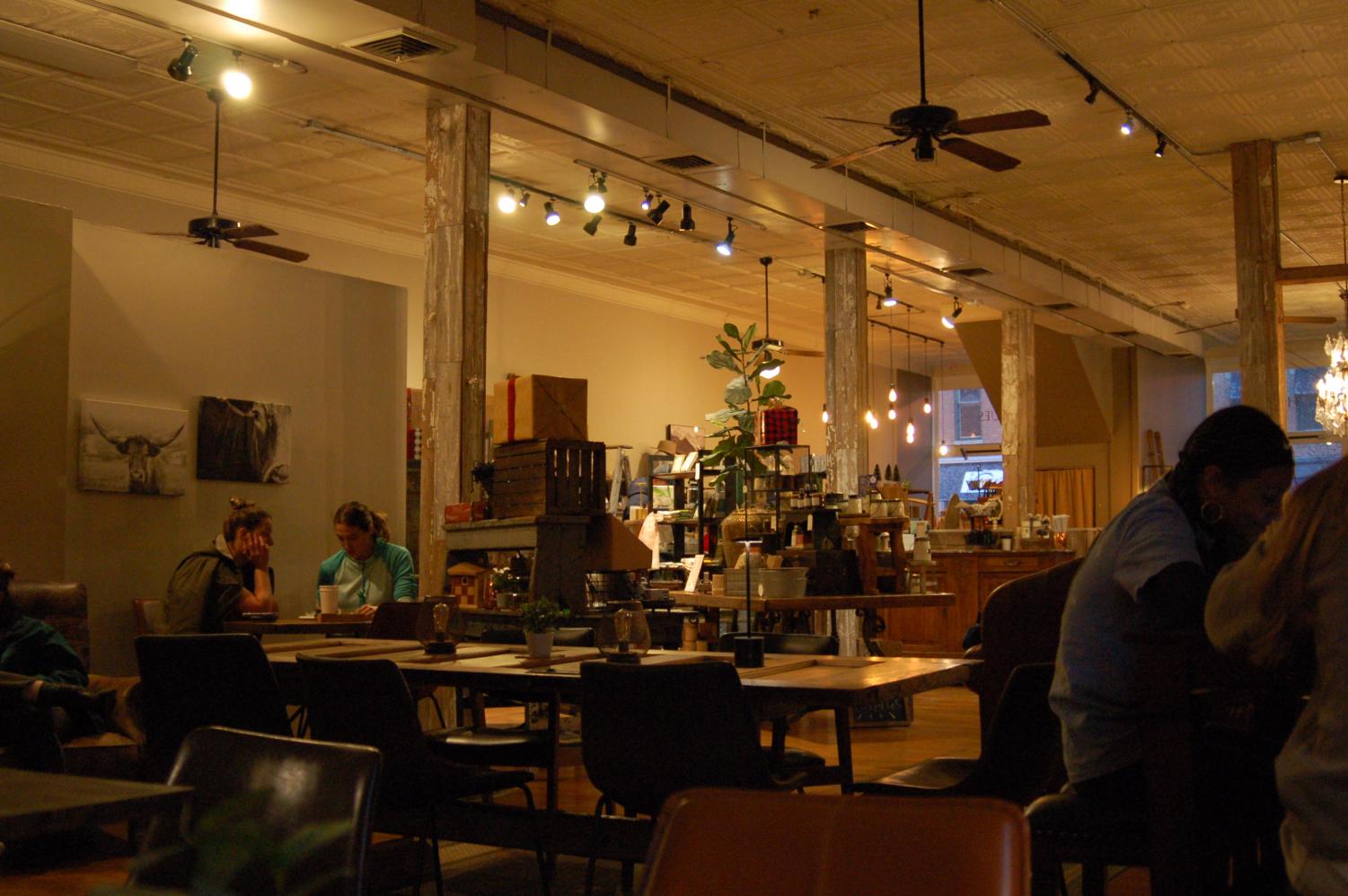 People drinking coffee and talking while sitting in Coffeeology.

Autumn contained in a single city corner, Coffeeology is an endearingly rustic shop which serves in more ways than one.

Where lavender and cacao can coincide in beautifully smooth harmony, the cafe boasts many interesting flavors of coffee and other caffeine products.

Along with typical food-oriented items, it is also a store for home decor, jewelry, clothing and candles, most of which are locally made or manufactured.

Coffeeology is host to a wide variety of items, a large array of drinks, and an excess of vintage appeal. 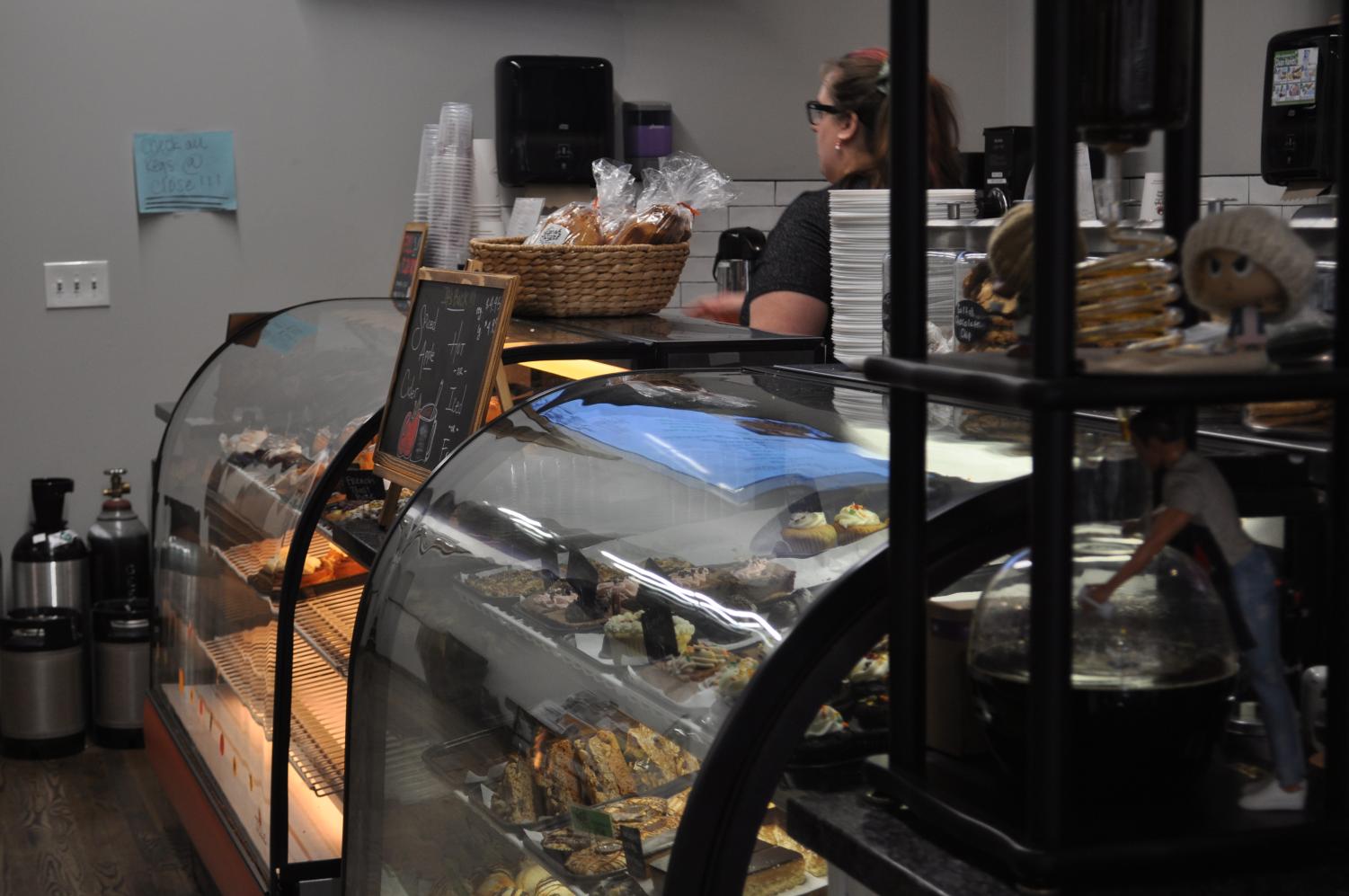 The front counter at Fresh Start Café and Bakery in downtown Delaware.

The most recent addition to the main street coffee pantheon, Fresh Start is an aptly named breath of fresh air. Although not necessarily as cozy as their artsy caffeine counterparts, the cafe and bakery is a sleek and polished outlet for all things baked and wholesome.

Although there is a limited number of drink menu items, there is a plethora of options for coffee lovers everywhere. 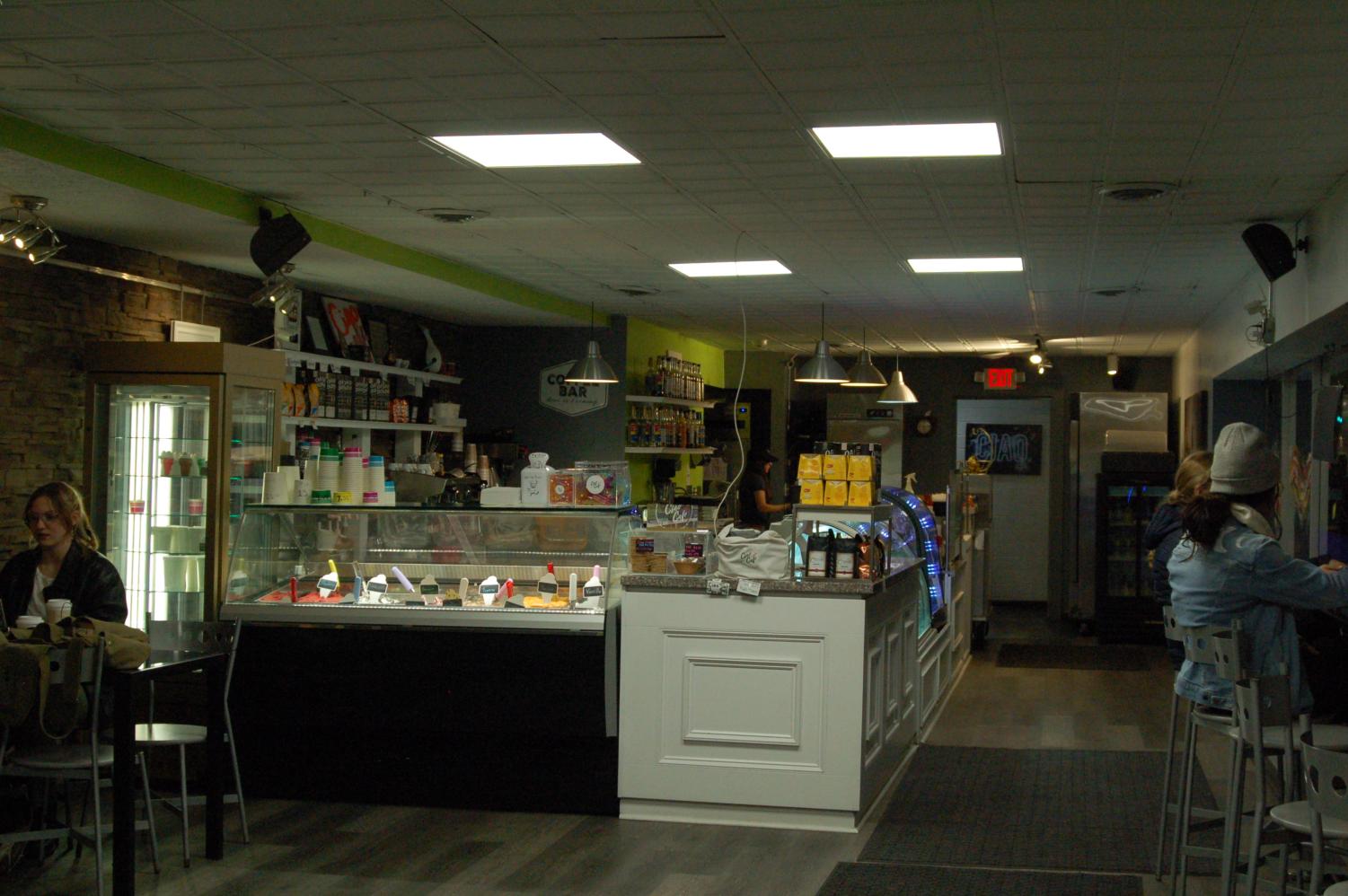 People eating and talking together at Ciao Cafe.

Pastries that look like they were grabbed straight from a painting, hand-crafted flavor-marbled gelato and aesthetic elegance so sharp that it could kill—that’s Ciao.

Possibly one of the most unique outlets in the county, Ciao found a way to brew charm in a cup. With lattes overflowing with tender hazelnut and vanilla, it’s nothing short of impressive how much attention to detail is placed into everything that they do.

An Italian-American cafe with an industrial feel, its window art depicting Italian banners next to steaming cups of coffee, the place screams character in an otherwise uneventful street corner. 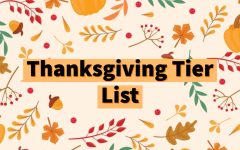 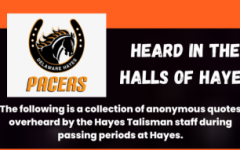